The majority of people would much rather be talking than listening. Unfortunately, many often exercise this preference. However, being a good listener can improve your life in a number of ways. In order to improve your listening, then read on – and stop talking at the back! 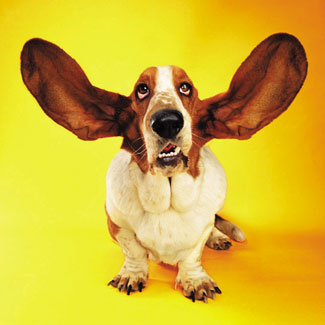 A study by Paul Rankin way back in 1929 showed that in a typical day’s communication, the average person spends:

By improving your listening skills, you are effectively improving on almost half of your communication skills in one blast.

1. Remove All Distractions from your Head and Concentrate on the Speaker

Although often thought of as the realm of the nutty, we all have voices in our heads. James Borg, in his book Persuasion* refers to these as playing back tapes in our heads. They cover all the little preoccupations that are swimming around our minds and can be to do with thoughts, senses and emotions.

For instance, you’ve just got home from a really gruelling day at work and an incident from the day is playing on your mind. Your wife starts to talk to you about the shopping list, but you really aren’t listening because you are playing over the incident from work in your head. Because of that, you end up eating low fat, cardboard cereal for the next fortnight.

Practice taking your distractions and putting them in a box while the other person is talking about something that is important to them. It will come with practice.

The above example used is a common situation in most households. Something my other half and I do when we get in is we each vent about the day at work and things that are still weighing on our mind. We get it out of our system, while the other one listens, and then the other one takes their turn. It’s not quite as regimented as it sounds, but it does really work. It would only work, though, as long as the other one listens.

2. Distinguish Between Hearing and Listening

This is one very important point to make. So many people think they are listening, when in reality they aren’t… at least not actively listening. If you are thinking about other things while another person is talking to you, you might hear the words being spoken by the other person, but your mind isn’t processing them, because it is focussing on the afternoon’s football results. This is where mistakes happen. Take the following conversation:

Person 1: “So I’ve just realised that we need to get the car taxed. It’s due at the end of the month, which is this Friday. I don’t know how it happened.”

Person 1: “You’re not listening to me are you?”

Person 2: “Yes I am, you were saying we need to tax the car. I’ll go to the post office next week.”

Clearly, Person 2 could hear what was being said and recorded it on his internal tape recorder, but hadn’t processed it.  In most households, this would have resulted in a row – a row that could quite easily have beena voided if Person 2 had been listening and not just hearing.

Too many times we think we have got the full story behind what somebody is saying, before they have finished talking. It could be down to impatience, an abundance of energy, or whatever, but people will jump in with an answer to the question that they think is being asked. A lot of the time they are wrong though. A former work colleague of mine is terrible for this. He’ll hear (note, I said hear, because he isn’t listening, he is only hearing) one word or phrase in my sentence, latch onto it and take the conversation off at a tangent.

Me: “So, I was looking at your analysis of the widget and whilst it’s good that you’ve started analysing for buckling, there really wasn’t much need, as the widget rib interfaces along the web, so you could clear it off with a statement.”

Colleague: “Ah yes, the widget. I’ve been that busy analysing the flimflam brackets, that I haven’t finished the widget. Anyway, I’m halfway through the buckling calcs.”

It doesn’t leave me with a great deal of confidence in my colleague, and leaves me wondering what else he doesn’t listen to. As a result, I end up checking his calcs a lot more thoroughly than I would any other analyst.  Most of the time, they are fine, but the doubt has already been cast.

This isn’t always a flaw of not listening to the other person, but more not letting them finishing. You can’t actively listen if you are putting words in their mouths. Consider the following:

Manager: “So, I’ve got a few parts here that need some stress analysis doing on them. I’d like to give them to you, but I’m worried that….”

You (interrupting): “will mess them up, like I did when I applied the wrong loads to the widget? I’ve learnt my mistake there”

Manager: “Well, I was actually going to say I was worried that you won’t have time”

If you hadn’t interrupted, your Manager may have forgotten about you messing up on your last analysis. All you did was bring it back to the forefront of his mind. Let’s hope this didn’t happen right before your appraisal.

So far I’ve mostly talked about what not to do, in order to improve your listening abilities. One positive action to take is paraphrasing.

What do I mean by paraphrasing? Well, basically you are summarising your understanding of what the other person has said. This has several benefits:

· It shows the other person that you were listening

· If there is any misunderstanding, it gives an opportunity for it to be rectified before you go off and take action.

· You may want to ensure that the speaker has heard what they have just said, and the implications.

An example of the last point would be:

You: “So, can I just be clear what you want? Although our standard product holds 16GB of data, you only want us to supply you with 8GB of storage? You realise that this will require modification of our existing product, so will be more expensive, and will make future expansion more difficult?”

Client: “Hmmm, you have a good point there”